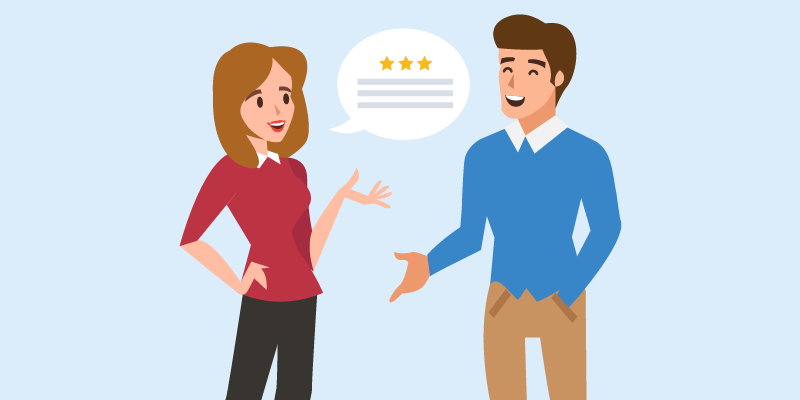 The idea of word-of-mouth enrollment marketing is a bit of a misnomer because, if you think about it, word-of-mouth leads are a result of having a good school rather than a marketing strategy.

Below is a video clip of Hubbli founder Jono Landon as part of the course on private school marketing provided by the Center For Guided Montessori Studies.

If you prefer to read rather than watch, we’ve provided the transcript of the video below.

Now, I would say that most of the schools we speak to, unless they’re in a very particular situation where they have a very transient population, word-of-mouth usually results in, I would say, about 80% of new enrollments that come into a school, but that’s the number we see. Sometimes I talk to schools, and they’re as low as about 50%. Again, because of their situation, but across the board, usually when we interview schools, and we ask them where their enrollments are coming from, their new enrollments are coming, about 80% of them, from other families that have been enrolled in the school, and suggesting that to their friends, or their family, that they should put their child in your school as well. So that’s not all that surprising because Montessori schools are amazing, and people see the results in their children. So this is just the result of a great product.

So how do you then strategically create more word-of-mouth referrals? So the best way to create more referrals is to use a referral program. So this is something you’ve probably run into before. Maybe you’ve seen other schools do it. So essentially, you want to give your enrolled parents an incentive to share how amazing your school is, to make sure that not only are they doing that, but you also want to give them a simple process, something that’s very easy for them to do. Something that you don’t have to rely on their memory to do either.

So ideally, you want to use technology to do that. And there are some straightforward ways of using digital forms that automate the process. A parent can fill out a very simple referral, digital form that lets them input their people to refer these other parents. Or it could be an invite to an open house. You want to make it really easy for parents to share an invite to that open house. So it could just be done by the paper as well. So that part’s up to you, but it’s good to make it efficient. That way, it’ll be more likely that it works out and that people will actually engage in the process.

As well, you want to think about this with your business hat on. And you want to apply some limitations because number one, you want to make sure that these referrals, you’re able to track them, so that you don’t have a family that’s like, “Oh, I referred 10 parents. And give me 10 times the incentives.” So number one, you can make this a one referral incentive per family. And this might be really, as a credit on next year’s tuition. Again, give them credit on next year’s tuition, and that’s having them thinking forward about next year. So it even helps with their retention.

You want to make sure that it’s obvious which of your existing families referred new families. Whether you have a paper application form, they have to list the family that referred them. Or again, you could use a digital process, which tracks that. It’s straightforward to set something like that up. It’s what a lot of our customers do with our digital forms in [Hubley 00:05:09].

So you also want to make sure that you wait until that new family’s tuition is actually received when you do offer that credit. So a referral incentive is only worth its salt. If you actually… Ultimately, again, strictly on the business side of things, you got that tuition in, and then that incentive is released to the parent.

So word-of-mouth again, to recap, ultimately, the best way to create more word-of-mouth referrals is to have a great school. But as we see across the board, that used to be enough, 10 or 20 years ago, have a great school, word-of-mouth will keep you full with a waiting list. That’s not the situation today for most schools anymore. There are way too many options now. And so, if you want to keep word-of-mouth coming in and improve that incrementally this year, design a referral program and offer a limited incentive, and make it really easy for parents to engage in that process. Ideally, with digital tools, rather than paper. You want to reduce the labor it takes for parents to offer those referrals. And that incentive also needs to be enticing enough, again, that they want to take the step and spend that time doing it and sharing it with their friends and family.

So in this lesson, we’re going to be talking about Facebook ads. Facebook is far and away the best place to be using your marketing budget to pay for ads, to engage prospective parents for your school. I say that from having seen and testing various ways to use different digital marketing platforms. The main reason that Facebook is so good is that the demographic that you’re looking to engage with, generally speaking, women between the ages of 24 to 45. This is the largest and the most engaged demographic on Facebook. Also, considering that within that demographic, you’re looking for people that can also generally afford to send their children to private school and value that are conscious of child developmental stages. And these are the types of interests that people in this demographic, with these interests, Facebook is far and away the best place to engage them.

To compare it, if you were to think, “What does…” Let’s say if you were to pair Google ads, compare Google ads to Facebook ads. Google knows some information about the people that are doing searches. They know what they’re searching for. They’ll know where they’re located. Generally speaking, that’s about as much as they know. When you think about Facebook, Facebook knows somebody’s interests, their friend connections. For a lot of people, they know their level of education. A lot of people know their net worth. These are things that really help you narrow down to the ideal prospective parents.

So when you understand your market that you’re trying to connect with, and obviously the more time you spend with your parents in your school, or as a teacher, you’re really going to understand the people that you’re trying to connect with. So when you have that much information and can really build a profile of your ideal prospective parent, it makes sense to use a tool with that much power behind it.

At the same time, it’s effortless to lose a lot of money on Facebook if you don’t know what you’re doing. So I want to caution you that this is not something that you want to do nonchalantly. You want to make sure that this is being done properly and you’re actually properly setting all the settings for every stage of the process. When you take a prospective parent that engages one of your ads and lead them through all the way to basically come into the school for a tour. There are several things that you need to make sure are happening properly, or it’s easy to waste money on Facebook ads. It is just as easy as it is to waste money on a newspaper ad, where you really don’t know what value you’re getting out of it. And that’s really the most important thing.

One of the best parts about digital marketing, in general, is that you’re able to track every interaction and understand how every stage of the marketing process is performing. You can track each stage and then test it and optimize it, making digital marketing far and away better than any print advertising you can do. Because print advertising is just kind of… That’s a marketing strategy that works on hope and prayer. And digital marketing systems allow you to make very informed decisions and updates to your campaign. It’s effortless. It’s possible to take a Facebook campaign that’s performing, let’s say moderately well, and with one small change, you test one element of the campaign, and you can improve it by 400% overnight.